Tumuli Lava - A Backdoor into the Badlands

What are tumuli (besides the plural of tumulus)? From the Latin tumidus, meaning swollen or bulging in shape, a tumulus is a circular, domed lava structure up to 30’ high and 60’ in diameter, formed by the upward pressure of actively-flowing lava against its cooling crust. Along with its elongated cousin, the pressure ridge, these fascinating lava formations can be explored on a less-traveled trail in the Badlands Wilderness, just 15 miles east of Bend.

For lava to inflate and create these characteristic “blistered” landforms, it must be quite fluid and must be flowing across terrain with little or no slope. As the flowing lava spreads out, it’s leading edge moves slower and slower, and eventually freezes and stops moving. At the same time, the top of the lava sheet has been cooling to form a thickening, hard crust. 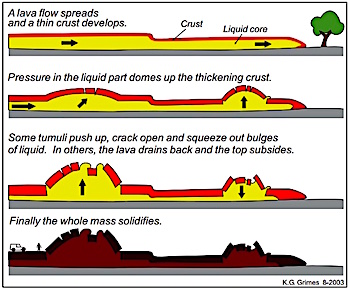 Though the edge of the flow has stopped moving, lava is still erupting and flowing into the interior of the sheet. This creates tremendous internal pressures, causing the lava sheet to swell up and inflate, and the surface to rise from 1-2 feet thick to tens of feet thick. As the surface crust expands, it cracks, and hardened slabs of surface lava tilt and rotate upon the more plastic lava below. Both tumulus blisters and pressure ridges often have a single large inflation crack down their middle, though many smaller fractures also form on the inflating lava surface.

It’s believed the Badlands Lava Field originated 80,000 years ago from a vent located near Lava Top Butte on the flanks of Newberry Volcano, and the lava traveled northeast through the Arnold Lava Tube System to its present location. Because this field is relatively young and only slightly eroded, its remarkable features are mostly above ground and not buried in soil. Only a few feet of more recent windblown ash make up the sandy soils within this lava field today.

Inflated-lava features are found throughout the 29,000-acre Badlands Wilderness, but not all of the trails here can be considered less-traveled. Those trailheads on the southern edge of the Wilderness, just off of Hwy 20, receive the greatest number of visitors, especially on weekends. Hikers seeking more quiet and solitude can start from the little-visited Tumulus Trailhead on the northern edge and explore the lava fields on an easy 3.2-mile (one way) ramble. 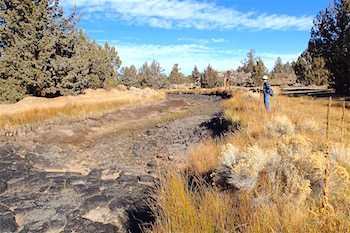 The hike starts from a broad dirt parking area off Johnson Ranch Road (see map download below) and follows a dirt track south and east along the Central Oregon Irrigation Canal. This canal is a cool, refreshing stream from April through September, but is generally dry in the other months, save for a few winter stock water runs. At 1.5 miles, just past the second green gate where the canals split, one comes to the Tumulus Trail sign on the left (east) and enters the Wilderness.

The quickest way to reach the edge of the Badlands Lava Field is to walk about 0.6 miles east on the Tumulus Trail, then turn south onto the signed Black Lava Trail. Within 0.5 miles of this trail junction, the edge of the lava field rises up on the east and the tall tumulus blisters, pressure ridges and plateaus come into view.

For the next half-mile, the trail (now an old double-track road) wanders among these tumuli lava mounds, studded with gnarly, ancient juniper trees and surrounded by sandy flats with sagebrush and rabbitbrush. Though there are remarkable lava features right along the trail, one can easily explore cross-country for miles through the cracked and broken landscape to the southeast. Just be sure to keep your bearings (or create a few GPS waypoints), as it’s easy to get turned around in this rugged lava terrain. Return as you came.

In spring, the Badlands Wilderness blooms with a variety of desert wildflowers, including Oregon sunshine, dwarf monkeyflower, sulfur buckwheat and indian paintbrush. It’s also home to a variety of wildlife, including black-tailed jackrabbits, mule deer, elk, pronghorn and coyotes. Plus, more than 100 species of birds can be found here, including golden eagles, sage grouse, prairie falcons and several desert songbirds. So be sure to pack along your binoculars.

Finally, kudos go out to the Friends of Oregon Badlands, a volunteer group that maintains the trail signs and performs clean-up and restoration work throughout the Wilderness, including the removal of obsolete barbed-wire fences. Please support their efforts if you can!