The original railroad surveys of the Deschutes River Canyon, conducted in 1855 by Army engineers, concluded that “the Deschutes Valley is mostly a barren region…separated from the rest of the world by almost impassable barriers.” In fact, at the turn of the century, Central Oregon was the largest territory in the U.S. without a railroad. Only in the early 1900s, when its wealth of ponderosa pine was recognized by commercial interests, was serious rail construction begun south from the Columbia up the Deschutes River. Hikers today can follow a section of this now abandoned rail bed for many miles, with spectacular river and canyon views.

The promise of the virgin ponderosa pine forests in Central Oregon was so great that, not one, but two railroad companies began construction from the Columbia River in 1909. It was to be the last great railroad-building race in the West. The Oregon Trunk Line, a subsidiary of James Hill’s railroad empire, began building up the west bank, while the Deschutes Railroad, 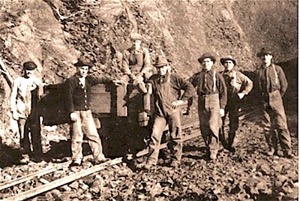 controlled by rail magnate Edward Harriman, started up the east bank. Advance parties from both lines vied to claim strategic points along the canyon, while the rival construction crews did all they could to impede the other’s progress.

Interestingly, the construction of rail lines in the canyon marked the end of an era, as this was the last of the big projects done mostly “by hand.” Thousands of laborers from all over the world, including Italian, Dutch, Irish and Chinese, worked in the sweltering heat of the rocky canyon, using picks, shovels, wheelbarrows and hand-drilling tools — plus black powder, which blasted away the hard basalt cliffs.

By the end of 1909, the absurdity of the railroad war in the canyon became apparent to both sides, and an agreement for joint operation was reached in May 1910. Both railroads would share some sections of track (including the railroad bridge over the Crooked River), 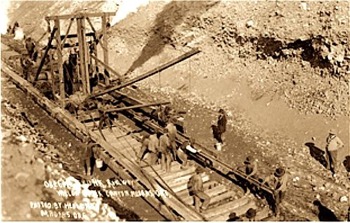 allowing full rail service to reach Bend in September 1911. Soon thereafter, the sawmills were busy milling ponderosa pine on both sides of the Deschutes River at Bend, which saw its population boom from 500 in 1910 to over 5,000 by 1920.

Gradually through the years, the two railroad companies consolidated their trackage in the Deschutes Canyon. In 1923, the Oregon Trunk Line agreed to use the Deschutes Railroad’s track up Trout Creek to Madras and to abandon its track along the river south from Trout Creek and up Willow Creek. By mid-century, both lines were operating over a single track between Bend and the Columbia River. Though the railroad war was ultimately in vain, hikers today benefit from the miles of abandoned rail bed on public lands in the canyon.

The Deschutes Canyon is a study in contrasts, a great blue-green river winding through a dry rimrock canyon with sheer basalt cliffs. Next to the old railroad grade, western junipers dominate, along with tall sagebrush, bitterbrush and rabbitbrush. In spring, wildflowers accent the hot, dry uplands, including showy arrowleaf balsamroot, pink phlox and yellow fiddlenecks. 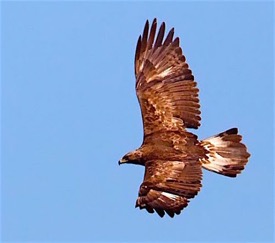 But just a few yards below the trail, the riparian zone of the river is an entirely different world — cool, shady with white alders, cottonwoods and green grass next to the flowing water.

Birdlife is mostly concentrated in this riparian zone, with red-winged blackbirds, black-and-white magpies, mergansers, ducks, canada geese and osprey commonly found here. But the most majestic birds sighted in this area are golden eagles, which nest in spring among the steep basalt cliffs far above the trail. With binoculars, one can track these magnificent birds soaring and spiraling on rising air currents above the cliffs. As a precaution, the uplands south and east above the trail are closed to visitors from January 15 to August 31 each year to protect the nesting eagles.

NOTE: Rattlesnakes are not uncommon along this trail during the warmer months, so be alert.

The Hike from Trout Creek

The trailhead is at the south end of the Trout Creek Campground, a recreation site on the Deschutes River managed by the BLM. It’s about 16 driving miles due north of Madras, following paved farm roads across the Agency Plains and down into the Trout Creek canyon. There’s a railroad tunnel on the Trout Creek road with a height limit of 14’ and the last few miles to the river are gravel, but this road is easily traveled year-round by almost any type of vehicle. For detailed driving directions, download the PDF road map below.

From the campground, the hiking route follows the old railroad grade south along the east bank of the river, elevated about 50’ above the water. The canyon views are spectacular any time of year, 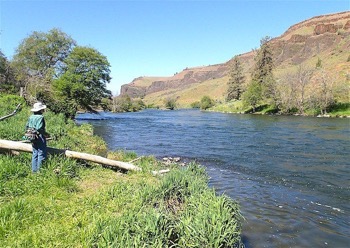 but are probably best enjoyed in the spring and fall to avoid the crushing heat of July and August (since there’s very little shade along this trail). Within the first mile, the trail passes a large island, created by a split in the Deschutes River. Look for mergansers, ducks and geese along the island’s shore here.

At 2.4 miles, the route crosses a wooden footbridge over a creek at Frog Springs, where there’s also a vault toilet and primitive campground, used primarily by river rafters. For an easy hike, this can be a good turnaround and lunch spot, since there’s good access down to the shady grass banks along the river. Birdlife is abundant here, some of the best on the entire route. If feeling ambitious, one can follow the railroad grade for another 5 miles to the east beyond Frog Springs, with further picturesque river and canyon views. For details, download the PDF trail map below.