Sometimes the distinctive natural landforms of a place combine with centuries of human activity to create an exceptional mix of geography and history. The Klamath Marsh Narrows is such a place. This three-quarter mile crossing, in the midst of 65 square miles of sprawling marshland, has been used by Native Americans for millennia, by the John C. Fremont expedition in 1843, and by travelers down to the present day. It’s one of the best birding spots in Central Oregon, and hikers can follow in Fremont’s footsteps along the edge of the grasslands, enjoying solitude and sweeping Cascade mountain views.

Native Americans at the Crossing

For thousands of years, the Klamath Tribes inhabited villages along the shore of Klamath Marsh. The marsh and its environs were so productive that perhaps 500-700 people were supported by its abundant plant foods, waterfowl and fish. Reed boats made from tules, and dugout canoes carved from ponderosa pine logs,

were the primary means of water transport.

From their canoes, the Tribes fished using two-prong spears, hunted waterfowl, collected duck eggs, gathered tule reeds and most importantly harvested wocus (yellow pond lily) seeds. These were ground into flour and stored for winter use, serving as a primary staple and survival food. Historically it’s estimated there were 10,000 acres of wocus-dominated wetlands in the marsh — including at the Narrows where wocus beds can be found today.

Fremont Expedition at the Crossing, 1843

Though Euro-American fur trappers visited Klamath Marsh as early as 1826, the first non-native Americans to actually cross the Narrows were the John C. Fremont expedition in the winter of 1843. With 25 men and over 100 mules and horses, they followed native trails to a camping spot at the west edge of the Narrows. From Fremont’s journal:

"December 10. A low point, covered with pines, made out into the lake, which afforded us a good place for an encampment, and for the security of our horses, which were guarded in view on the open meadow…The point on which we were encamped forms, with the opposite eastern shore, a narrow neck, connecting the body of the lake with a deep cove or bay which receives the principal affluent stream…"
Two days later, the Fremont party crossed the Narrows and traveled on to their next campsite in Skellock Draw, about 6 miles to the south: 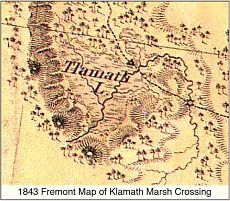 "December 12. We struck our tents at 10 o’clock, and crossed the lake in a nearly east direction, where it has the least extension—the breadth of the arm being here only about a mile and a half. There were ponds of ice, with but little grass for the greater part of the way, and it was difficult to get the pack-animals across, which fell frequently, and could not get up with their loads, unassisted…In about two hours, we succeeded in getting the animals over; and, after traveling another hour along the eastern shore of the lake, we turned up into a cove, where there was a sheltered place among the timber, with good grass, and encamped."

The first wagon road across the Narrows was built by the Oregon Central Military Road Company in 1864. This company was organized to construct a road across the State suitable for military wagons and pack trains, from Eugene to the Snake River Valley. But in most of Eastern Oregon, little actual construction was done and the Company did little more than clear trees, brush and rocks from existing trails long used by natives and the Fremont party.

The company did, however, build a crude causeway of logs across the Narrows, and improve for wagon travel the trail used by Fremont along the east edge of Klamath Marsh. From 1867-1874, this road was used mostly by troops stationed at Camp Warner near Hart Mountain, and later by local settlers in the area. It also gave the Narrows its current name, “the Military Crossing.”

To reach the Narrows today, visitors should look for a turnoff onto the red cinder Military Crossing Road on the east of Hwy 97, about 6.5 miles south of Diamond Lake Junction, then drive 9 miles east to the crossing (see map download below). Once at the causeway, there are good opportunities for bird watching in the adjacent tule marshes, willow thickets and open water — either on foot or from the car. Over 140 bird species have been sighted here, with spring and early summer the best birding seasons, due to low water levels in the fall.

Also, hikers and history buffs can follow Fremont’s footsteps and the track of the old Military Road on an easy trail south of the crossing. From the causeway bridge over the Williamson River, drive 0.6 miles east to Forest Road 7633 on the right. Turn south onto this dirt road and drive 0.3 miles to a turnout on the right, just past the first cattle guard. From the turnout, the old wagon road is found 100 yards down a lane to the west, a faint track running north-south along the edge of the grasslands (see map download). 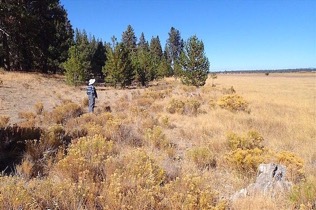 For most of its length, the route south is easy to follow over an ancient lake terrace along the edge of the grasslands. Mostly it’s a sandy cow trail today, through rabbit brush and past big ponderosa pines, but the old wagon track is clearly visible in spots. The views west across the grasslands are spectacular, to the high mountain peaks along the Cascade crest. There’s no set destination for this hike, and it can be as long or as short as desired. At 1.6 miles, there’s a row of large posts across the track, which can make a good hike turnaround point.