Tucked away in a nearly-forgotten corner of Deschutes National Forest, just an hour’s drive west from Culver, the hike along the Lower Metolius River follows a long-abandoned road for 3 miles over riverside terraces and through stands of old-growth incense cedars and firs. The star attraction here, though, is the local population of ospreys, a species of fish hawk that nests in the top of large snags near the river. Hikers during summer will be treated to the aerial displays of these soaring raptors, overhead and around their large stick nests. 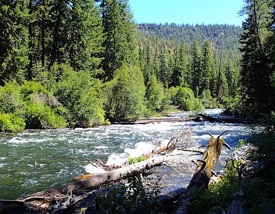 Hydrology of the Lower Metolius

Due to its spring-fed origins near Camp Sherman, the streamflow in the Lower Metolius is fairly stable throughout the year, with mean daily flows around 1300 cfs in October and 1600 cfs in June. However, during the spring snowmelt in May and early June, peak flows can reach over 3,000 cfs, which is when the river is most dangerous for the inattentive hiker. Be careful near the river’s edge at all times, but especially during these high peak flows.

Osprey on the Lower Metolius

One of the Northwest’s most notable migratory birds, ospreys have dark brown feathers above and white feathers below, with a white head and a prominent dark eye stripe. In flight, they are distinguished from bald eagles by the distinct bend in their wings at the wrist, creating an “M” pattern. The osprey’s call is a distinctive series of loud, sharp whistles. 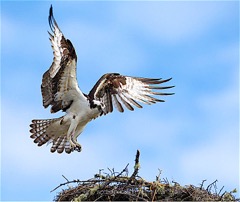 They are large birds, weighing 3-5 lbs. with an average wingspan of about 60”, and they prey exclusively on fish. It’s a treat to see an osprey hunting, hovering high above the water, then diving up to 2’ below the surface to capture a fish. With the close proximity of Lake Billy Chinook, the osprey of the Lower Metolius likely feast on the kokanee, bull and rainbow trout, and bass that are abundant in the nearby reservoir.

One remarkable characteristic of the Northwest osprey population is its long-distance annual migration from summer nesting sites in Central Oregon to wintering grounds in Mexico and Central America. Though adult ospreys mate for life, the pairs migrate separately and winter at different locations, reuniting each spring at the same nest after a 6-month hiatus. Ospreys in Oregon fitted with small transmitters have been tracked by satellites to overwintering sites at Mazatlan and Puerto Vallarta in coastal Mexico, and further into El Salvador and Honduras (see map). 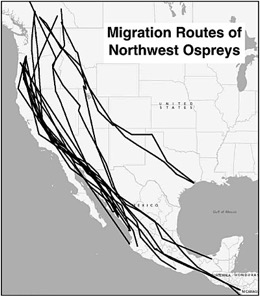 Typically, ospreys arrive back on the Lower Metolius in April to re-occupy their bulky stick nests on the top of broken-off snags. Courtship activities, breeding, egg laying and incubation occur April through May. Ospreys raise one brood per year, laying 1-4 eggs, which hatch in about 40 days. The male brings fish to the female during the incubation and nesting period, and also shares the incubation duties. The female stays in nearly constant contact with the chicks until they are 35-40 days old. She then leaves the nest more often to share in the hunting duties, until the chicks are able to fly in late July and early August.

Nesting osprey are susceptible to human disturbance, especially during the incubation and early nesting period. Disturbances can cause them to leave the nest frequently or for extended periods, which can be fatal to embryos and nestlings. For this reason, the Forest Service keeps the winter gate on Road 64 closed until June 1, to protect the developing young ospreys.

Once the winter gate on Forest Road 64 opens around June 1, one can drive a further 2 miles up the Lower Metolius canyon to the summer gate, which is kept closed year-round. For driving directions to the summer gate on Road 64, see the Road Map download below. 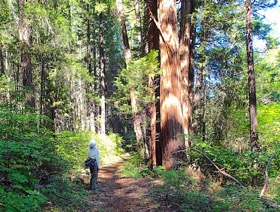 From the summer gate, the hiking route follows Road 64 for about 270 yards northwest, then drops down to the old road about 50’ below the modern road. From here, one has panoramic views over the river and lower canyon. Follow the old road upstream as it drops down to riverside, into a forest of old-growth incense cedars and firs, with a dense understory of maple and thimbleberry.

For the next half mile, the old road runs along the river terrace, sometimes adjacent to the rushing stream. In this section, one often hears ospreys calling overhead, but they are hard to see through the thick forest. At 1.2 miles, the road skirts a broad, dry open flat that contains several broken-off snags with large osprey nests. This is probably the best spot on the hike to sit and watch these impressive birds, as they wheel overhead and fly back and forth to their nests. 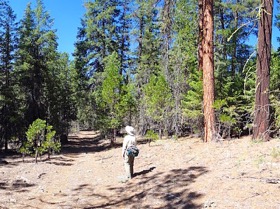 Past the flat, the old road climbs uphill onto a higher bench, and for the next mile wanders upstream through a drier forest, with big ponderosas and long views across the river canyon. At 1.8 miles, the road actually climbs up onto Road 64 for about 50 yards, before continuing again below the modern road.

At 2.0 miles, the old road turns into a nicely graded track, as it winds northwest toward the private property at road’s end. At 2.5 miles, the road descends once again to the river, into a forest of old-growth cedars and firs, with a distinctly primeval feel. For the next half mile, the road is beside and above the river, giving one a good choice of lunch and rest spots along the stream. At 3.0 miles, the road ends at a “Road Closed” sign, where it enters private property. Return the same way that you came.