In the late 1800s, Central Oregon was not an easy place to reach from the Willamette Valley. Though there was great demand for access by stockmen, who desired to drive their cattle east into the vast bunchgrass plains, the Cascade Range was impassable in winter and the few established trails were difficult and dangerous. That is, until John Templeton Craig pioneered a wagon road across the lava fields at McKenzie Pass — a route that can still be enjoyed today by adventurous hikers.

History of the McKenzie Pass Road

The first attempt at a road over McKenzie Pass followed a Native American trail three miles south and 1,000’ higher than today’s pass, near the base of North Sister. Known as the Scott Trail, the road was started in 1862,

but had deteriorated from lack of maintenance by 1870.

In 1871, several road companies were formed to attempt a traverse of the 2.5 miles of rugged lava blocking the route over McKenzie Pass. Finally, by the Fall of 1872, the company formed by John Templeton Craig and his partners were successful in grading a track up Lost Creek Canyon, over the lava field and down to Sisters and Camp Polk. This toll road charged $2.00 for a team and wagon and $1.00 for mounted rider. Loose cattle were ten cents a head and sheep were a nickel. It’s popularity was such that almost $18,000 in tolls were collected before the route became a public road in 1898.

Not to say that traveling the road was easy, especially the section across the lava fields. Until one actually walks this route across the rugged lava, it’s difficult to appreciate just what an accomplishment its construction was. For early day motorists, top speeds were 5 mph due to the many rocks, high centers and, in places, planks laid over the jagged rocks. In 1919, work began on re-grading and re-building the route over the pass, which was completed in 1925. 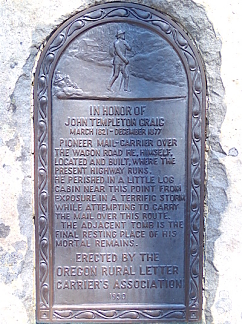 However, it still took up to 12 hours to drive from Corvallis to Sisters via McKenzie Pass.

NOTE: The grave and old cabin site of John Templeton Craig can be found at a turnout on Hwy 242, 1.8 driving miles west of modern-day McKenzie Pass. It’s worth a visit if in the area.

Hike on the Pioneer Wagon Road

The hike starts in the parking area for the Pacific Crest Trail at McKenzie Pass, just a half-mile west of the Dee Wright Observatory (see PDF map download below). Instead of taking the Pacific Crest Trail, the route goes cross-country to the north, following the edge of the lava flow. After 300 yards, one finds the ramp of the old pioneer road climbing west up onto the top of the lava field.

Follow the road grade southwest as it winds through the rugged lava. About every 100 yards, one finds the weathered poles of an old abandoned telephone line along the route, some still standing and others fallen. The first half mile of road is through barren lava with a few picturesque silver snags, but few living trees. Throughout this section, the vistas south to North and Middle Sister are spectacular. At 0.7 miles, the road passes near some interesting large pressure cracks that formed in the cooling lava.

The landscape is one of dark and forbidding lava, but it’s soon punctuated with stunted mountain hemlock and whitebark pines, some growing right in the old road bed. At 1.4 miles, the road descends into a shady, forested kipuka island, a welcome respite in the vast sea of lava. This can make a good hike and lunch destination. However, if feeling ambitious, one can trace the old road to the south end of the kipuka island, and follow it for another 0.4 miles south across the lava field to Hwy 242.

A few cautions: This hike is best enjoyed in the cooler spring and fall months, as the dark lava can turn into an oven on hot sunny days, and there’s scant shade along the old road. Also, Hwy 242 is closed in winter and is not ordinarily opened until late June or early July. A Northwest Forest Pass is required at the parking area. Finally, be sure to wear sturdy footwear, as the old road bed is mostly small, loose and often sharp lava rocks.