Human nature seems to be fascinated with finding the center of things, that one neutral point on the landscape where all competing claims are in equilibrium, where we can say with finality, “This is it!” While we can be certain that the geographical center of Oregon is indeed in Central Oregon, 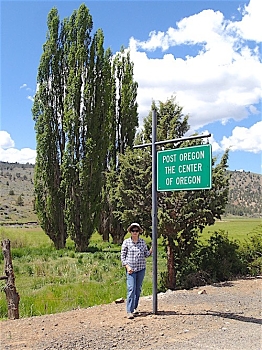 we unfortunately can’t be satisfied that there’s just one, undisputed center point.

The problem is that the geographic center of any irregular shape wrapped around an enormous sphere like the Earth can be calculated in more ways than one. Each different method of calculation produces a different geographic center. In a 2007 report, the U.S. Geological Survey wrote:

“Because there is no generally accepted definition of a geographic center and no completely satisfactory method of determining it, there may be as many geographic centers of a State or county as there are definitions of the term.”

In this post, we highlight two distinct methods of determining Oregon’s geographic center, one historical and one modern, plus provide travel directions to both of these points on the Central Oregon landscape. We leave it up to readers to decide which of these two center points (or both) best satisfies their curiosity! 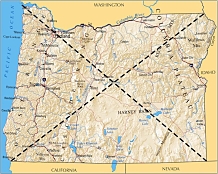 Soon after the State of Oregon was carved out of the Oregon Territory and admitted to the Union in 1859, mapmakers were undoubtedly speculating about the geographic center of the new state. It’s not surprising that, since many new Oregon residents were from the Midwest where several states are perfect rectangles, and Oregon’s new boundaries were roughly rectangular, the first approach used to determine the State’s geographic center was the “diagonal lines method.”

This simple method, though lacking sophistication, is easily employed by anyone. You can try it for yourself on your kitchen table. Get out any Oregon map and draw an imaginary X across the state from corner to corner. Near where the lines intersect, you’ll find the small hamlet of Post, located on the Crooked River about 25 miles SE of Prineville.

One drawback of this method is that the precise location of the center point near Post will vary with the map projection used. But since all of the land around Post is privately-owned, one cannot visit an exact point anyway. Visitors have to be content with a stop at the Post General Store on Hwy 380 (aka the Paulina Highway), which is recognized today as Oregon’s geographical center on most modern maps. Besides good milkshakes in 8 flavors, one can purchase shirts, hats and mugs here bearing the logo, “Post - The Center of Oregon.” 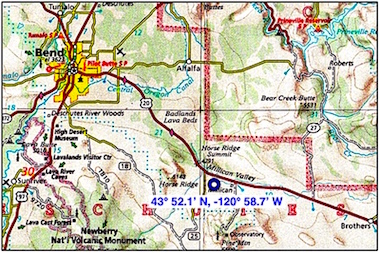 A more sophisticated way of determining the geographic center of an irregular shape, known as the “center-of-gravity method,” was later developed by 20th century geographers. With this method, imagine a map of Oregon laid out on a piece of cardboard, which has been precisely cut around its borders to produce a perfect, evenly-thick map of the State. Now imagine balancing this cardboard map on a single needle point. Wherever it balances, that is the geographic center of the Oregon. In recent years, computers using digital maps have refined this center point to a set of exact coordinates a few miles west of Millican, Oregon: 43° 52.1’ N, -120° 58.7’ W.

The good news is that this geographic center is found on public land (BLM), about 21 driving miles southeast of Bend between Horse Ridge and Pine Mountain. It’s located off good gravel roads south of Hwy 20 (the Bend-Burns Highway), and is accessible to anyone who wants to follow their GPS device to a precise center point. The bad news is that reaching this precise point entails a 0.4 mile, cross-county hike across a dry, featureless sagebrush plain. There are no milkshakes waiting at this location!